The Newbe.Claptrap project is a service-side development framework that the author is building on the theoretical basis ofreactive,Actor mode, andevent traceability.In this article, we'll look at the framework's ability to scale horizontally.

After a long time, we meet again today.First of all, I would like to introduce the past project：

For first-time readers of this framework, you can read the basic theory and how it works here.

Recently, we have also written some warm-up articles and tools, readers can learn about the：

Today, let's do a lab preview to validate the Newbe.Claptrap framework and how to adapt to the growing number of online users in the form of horizontal extensions.

Let's first look at the business scenario to be implemented today：

If a user logs on, it takes 100 ms.So whether the number of users online today is ten or a million.This login does not take significantly longer than 100 ms.

Of course, limited physical hardware is sure to slow down or even make it easier or even wrong for new users to log on when the number of online users exceeds a threshold, such as two million.

However, by increasing the physical machine, this threshold can be raised, and we can consider the horizontal expansion design to be successful.

For any online user, the system performance feedback should be the same#

For example, users who are already online need to consume 100 ms to query their order details.Then the average consumption of order queries by any one user should be stable at 100 ms.

Of course, you need to rule out high-concentration performance issues like snapping up.The main discussion here is the daily steady increase in capacity.(We'll talk about "snapping" separately later)

The specific point can be understood in this way.Let's say we're doing a cloud note product.

So if adding physical machines increases the number of users who use cloud note products at the same time, without sacrificing the performance experience of any one user, we think horizontal scaling design is a success.

In this experiment, if the user is already logged in, the time to verify the validity of the JWT is approximately 0.5 ms. 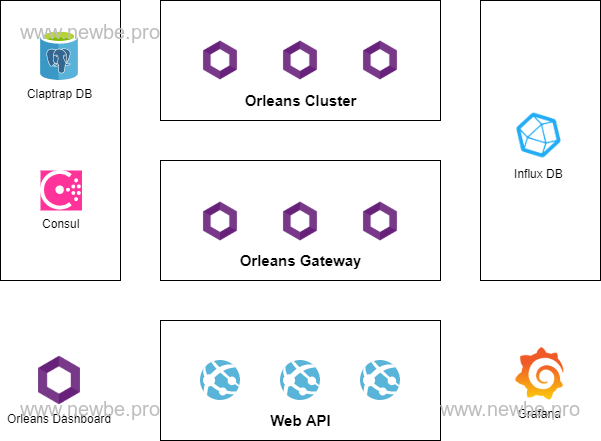 As shown in the figure above, this is the physical component of the test：

The number of Orleans cluster nodes in this experiment is actually the total number of Cluster plus Gateway plus Dashboard.The above divisions are actually distinguished by differences in function settings.

The physical nodes that test the Horizontal Extension feature are primarily The Orleans Cluster and The Orleans Gateway.Memory usage for the following conditions will be tested separately.

This experiment uses deployment testing by Windows Docker Desktop in conjunction with WSL 2.

The above physical structures are actually designed according to the most complex circumstances of the experiment.In fact, if the business scenario is simple enough, the physical structure can be cropped.You can see the instructions in the FAQ below for more details.

By default, when you first start the Dashboard node, portainer allows you to see that the container consumes about 200 MB of memory, as shown in the：

The test console makes 30,000 requests to the WebAPI.Each batch of 100 requests is sent in batches.

After a wait of about two minutes, look again at the memory, about 9.2 GB, as shown in the：

In addition, you can view some secondary data：

Orleans Dashboard.The 30,000 in TOTAL ACTIVATIONS in the upper left corner represents the number of UserGrains currently in memory, and the other three are Grains used by Dashboard. 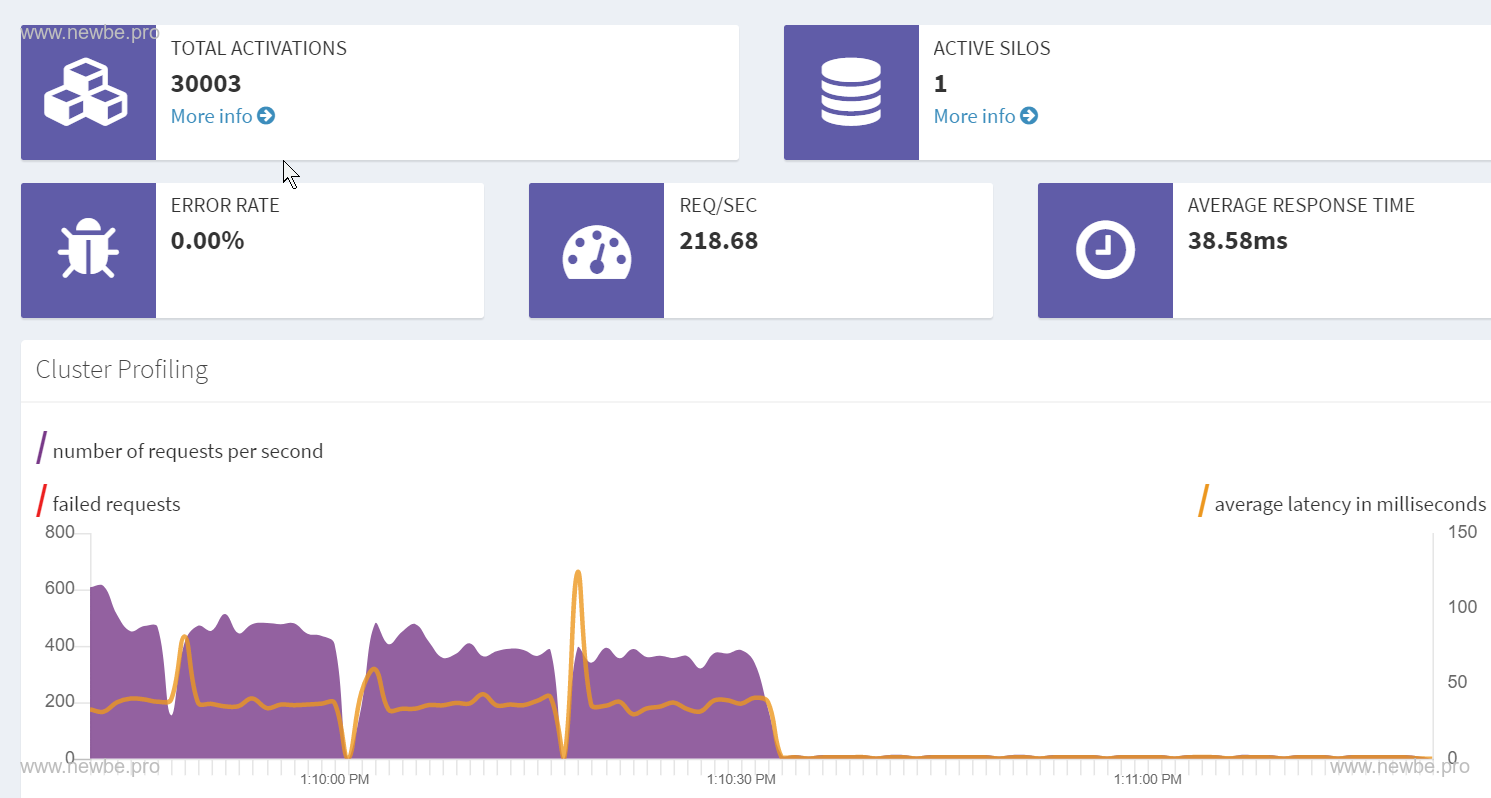 The average processing time for events viewing Newbe.Claptrap in Grafana is approximately 100-600 ms.This test is primarily a memory condition, with a processing time of 30s, so the sample size is small.We'll test it in more detail in a later article about the processing time.

The average time it takes to save events in Grafana to view Newbe.Claptrap is about 50-200 ms.The length of time an event is saved is a major part of event processing.

Next, we test for two additional nodes.

Again, the number of Orleans cluster nodes is actually the total number of Cluster plus Gateway plus Dashboard.Therefore, compared to the last test, the number of nodes in the test is 3.

The memory usage tested is as follows：

Why has the number of nodes increased and the average memory consumption has increased?The author speculates that there has been no validation：nodes have increased, and that communication between nodes actually requires additional memory, so on average it increases.

The memory usage tested is as follows：

All of the above tests are in the number of 30,000 users, which is a special number.Because the number of users continues to increase, the memory will exceed the memory balance of the tester.(Please sponsor two 16G)

If you continue to increase the number of users, you will start using the operating system's virtual memory.Although it can run, it is less efficient.The original login may only need 100 ms.Users who use virtual memory need 2 s.

Therefore, in the case of slower speeds, it may not make much sense to verify how much memory is required.

The code for this test can be found in the sample code base at the end of the article.To make it easier for readers to experiment on their own, docker-compose is primarily used for construction and deployment.

So the only environmental requirement for a tester is to install Docker Desktop correctly.

Use the console the src/Newbe.Claptrap.Auth/LocalCluster folder.You can start all components locally by running the following commands：

You need to pull some public images hosted on Dockerhub along the way, and make sure that the accelerators are configured correctly locally so that you can build quickly.can be set up by reading this document

After a successful launch,components can be through the docker ps website.

Once the startup is complete, you can view the relevant interface through the links below

Use the console the src/Newbe.Claptrap.Auth folder.By running the following commands, you can build the code locally：

After waiting for the build to complete, the relevant image is generated locally.Next, you can try to launch the app locally for the first time：

Use the console the src/Newbe.Claptrap.Auth/LocalCluster folder.You can start the container by running the following command:

Why aren't the code and configuration details described in the article?#

This article is intended to show the reader the experimental feasibility of this scenario, and how to write code using the Newbe.Claptrap framework, which is not the main thrust of this article and is therefore not mentioned.

The other point, of course, is that the framework is not finalized, everything is likely to change, and the details of the code are of little significance.

However, it can be explained in advance that：writing is very simple, because the business requirements of this example are very simple, so the code content is not much.All can be found in the sample repository.

Storage Token with Redis can also implement the above requirements, why choose this framework?#

At present, the author does not have a full reason to convince the reader must use which scheme, here is only to provide a feasible scheme, as to the actual should choose which scheme, should have the reader to consider, after all, whether the tool or need to try to know.

So the smallest is a process plus a database.

Why doesn't Grafana have a report?#

Grafana needs to manually create DataSource and import Dashboard after its first launch.

The parameters related to this experiment are as follows：

What is the physical configuration of the tester?#

There is no dedicated free memory and 16GB of memory was used before testing began.The following is the test machine's figure data (foreign garbage, about 3500 yuan)：

If you have a better physical configuration, I believe you can get better data.

The framework is still being optimized.The future will be better.